Well this bottle is not very large. It can only hold like 650ml of fuel. But it will be a nice thing to have for camping with a stove. I did the math and I can almost get 9.5 miles which it on the bike. That beats walking 20 miles. I used the hardware the bottle holder came with and some lock tight. We shall see how well it holds on my pannier.

Order the cheap $20 LEDs from Amazon. These things are great! Definitely worth $20 so far. We will see how they hold up.  I put the lights where the stock turning signals go. The guy who had the bike before me changed them out for some reason. The LEDs stick out a bit and will probably get messed up if I drop. but for a $3 dollar bracket not bad. I made it from a bolt and a spacer from a PVC pipe. The 5 foot pipe was cheaper than two 2″ plastic spacers from the hardware section at Lowes.

Here is a youtube of me riding at night with LEDs. https://youtu.be/7yePCSL-yGU

I have not hooked up a switch for it yet so no before and after night shots yet.

Edit: I have switch now. https://youtu.be/WgWCKnH-OTI 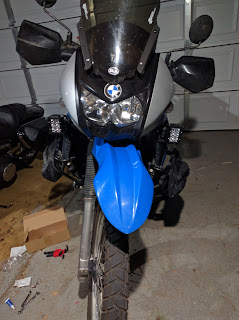 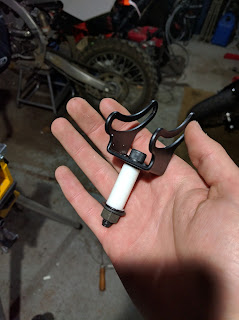 My low beam went out on my gen 2 KLR650 and I found a pretty easy way to change the bulb without taking the whole front fairings off.

Step one: Remove the front fender with the four screw.
Step two: Remove plastic tray thing and its metal bit (see pic)
Step three: unplug light. reach in there and find the cable on the back of the light. pull straight back.
Step four: you can how reach in and pull the rubber bit around the light off. See picture below. There are two little tabby like things just give one of them a tug and it should pop right off.
Step five: unhook the light bulb. There is a paperclip like hooky thing holding the light in. 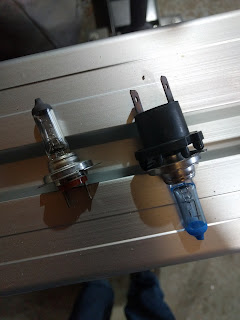 Step seven: put bulb in and bushings and test before you put plastics back on.
Step eight: put everything back together. YAY!!
Step nine: have a beer. because you are now done.
You can also watch this guy’s ‘backdoor’ video which tells you almost the same thing.
https://www.youtube.com/watch?v=8HW6Raax1Fw